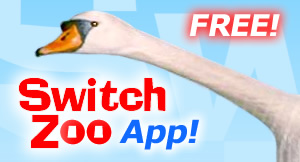 This performance of Erik Satie's Gymnopedie #1 and Gnossienne #3 is created entirely from animal voices, with photos by renowned nature photographer Ansel Adams.

PK: Visitors have asked us how these animal songs are created. Most, correctly, assume that we don't bring 12 animals together into a recording studio and hope for the best. How was this Satie piece produced? Walk us through the making of the soundtrack.

GS: Okay. After listening to and dissecting several audio and MIDI performances of Erik Satie's Gymnopedie #1 and Gnossienne #3, two of his most popular compositions, I divided each song into three parts, lead, chordal support and bass.

Next, I listened to my sound sample library searching for sounds that fit the tonal and emotions requirements for each section. When I heard an animal vocalization that was appealing and also contained a tunable note within our 12 tone system, I set it aside.

Using a sound editing program, I trimmed away unwanted parts of the sound before assigning it to a MIDI capable piano keyboard. For instance, using a typical rooster vocalization "Crock-a-doodle-doo", I'll delete the "Crock-a-doodle" and keep the "doo", because it has a nice attack, sustains in tune and also has a grungy decay. A rooster and mourning dove blend was used extensively as a chord (for example, the repetitive A minor chord in the beginning of the piece).

PK: Do you apply any effects to the sounds?

GS: Just reverb, and only to the final mix to help blend all of the sounds. Sometimes, distortion occurs because a single sample is applied to a range of notes beyond the animal's natural vocal range. The lower notes will sound slower and deeper, and the higher notes shorter.

PK: A loon was the featured soloist in the all-animal rendition of Fur Elise, is there a stand-out soloist this time?

GS: No, there is no single soloist this time. For the solos, I chose various blends of a nightingale, dove, pigeon, owl and a mosquito to handle the upper register. The mosquito was a surprise stand out. Its soulful performance is jarring because we usually have a negative association with mosquitoes (for good reason).

PK: Now, walk us through the making of the video.

GS: This is where you, in your role as Art Director, entered the project. After the song was completed, we discussed what type of visuals might work and concluded that nature photography seemed like a good candidate.

The hunt for complimentary visuals took us to The U.S. National Archives. In 1941, famed photographer Ansel Adams was commissioned by the US government to take photographs of the American West for a series of murals. Many of the photos echoed the ethereal mystery and majesty of the music and seemed like a perfect compliment to the soundtrack.

We looked through the 220 public domain images in the collection, finally selecting 25. We arranged them to fit the music using long, slow dissolves that worked with the modulating wolf howls.

PK: Thanks for running through the process. I'll let you go now... I know you have an orchestra to feed.